Social Media and Breast Cancer: A Call for Greater Diversity 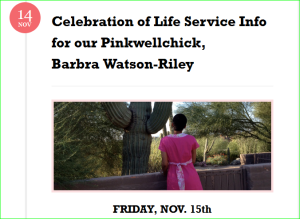 Barbra’s legacy is The Pinkwellchick Foundation.

The embers are still glowing from the social media firestorm Emma and Bill Keller ignited over the past few weeks. The husband-and-wife journalists each wrote articles about Lisa Bonchek Adams, a young mom diagnosed with metastatic breast cancer in 2012.

Emma Keller, writing online for the Guardian, questioned Adams’ use of social media to publicly chronicle her cancer treatment. (The piece was subsequently withdrawn.)  Bill Keller’s NYT Op-Ed ran less than a week later and essentially portrayed Adams as a dying woman grasping at straws, suggesting her treatment equates to “endless ‘heroic measures’ that may or may not prolong life but assure the final days are clamorous, tense and painful.”

The Keller/Adams controversy generated a lot of attention and traffic for all involved. But if it shows us the power of social media it also exposes some gaping deficiencies. A cursory look at those blogging, tweeting or otherwise commenting on this issue and metastatic breast cancer in general reveals a distinct absence of diversity.

Among the hundreds of breast cancer blogs, only about 25 or so that we know of feature people with metastatic disease. If there are African American patients blogging about their metastatic breast cancer their voices remain largely in the background. Barbra-Watson Riley one of the very few bloggers, died in November 2013. (The Pinkwellchick Foundation will continue Barbra’s work.)  Outside of the US, we know of a black British woman’s blog, “Afro Chemo.”

And yet, according to a 2012 Pew Internet Research Study, more than one quarter of online African-Americans (28%) use Twitter, with 13% doing so on a typical day. Major news outlets have recently done feature stories on BlackTwitter, “part cultural force, cudgel, entertainment and refuge,” according to the Washington Post.  So when it comes to breast cancer, shouldn’t there be more black social media voices? Shouldn’t we all be talking to each other? Are we missing opportunities to connect?

The Kellers, for all their fascination with Adams and metastatic breast cancer, had no comment on this December 20, 2013 New York Times story:

The cancer divide between black women and white women in the United States is as entrenched as it is startling. In the 1980s, breast cancer survival rates for the two were nearly identical. But since 1991, as improvements in screening and treatment came into use, the gap has widened, with no signs of abating. Although breast cancer is diagnosed in far more white women, black women are far more likely to die of the disease.

According to NYT reporter Tara Parker-Pope, the gap in cancer survival cannot be explained away by biological differences in cancer between blacks and whites. While African-American women are at greater risk of a more aggressive form of cancer known as triple negative, those cancers account for only about 10 percent of diagnoses.

Carole Dickens is a nurse navigator with the CHN

The New York Times article highlighted the work of The Congregational Health Network  (CHN) which builds upon the strong infrastructure of churches to reach deep into hard-to-reach and underserved communities. More than 400 congregations, including Baptist, Methodist, and Church of God in Christ, have signed up to be part of CHN, representing more than 15,000 patients. Eleven hospital employees, known as navigators, work with congregational volunteers, known as liaisons, to help congregation members make their way through the health-care system. The network offers weekly classes ranging from “Caring for the Dying” to “Mental Health First Aid.” More than 2,000 people have taken at least one class.

On the breast cancer front, Carole Dickens, a registered nurse and CHN navigator, visits congregations to present educational seminars and arrange mammograms and other screenings. This program is supported by Komen, the Avon Foundation and others.

A quick search reveals that people on Twitter are talking about CHN and its programs. This is a start–but we’ve all got to do more. Social media give us unprecedented communication power–but only if we use it proactively and creatively.

This entry was posted on Monday, February 3rd, 2014 at 4:57 pm and is filed under Uncategorized. You can follow any responses to this entry through the RSS 2.0 feed. You can leave a response, or trackback from your own site.

25 Responses to Social Media and Breast Cancer: A Call for Greater Diversity