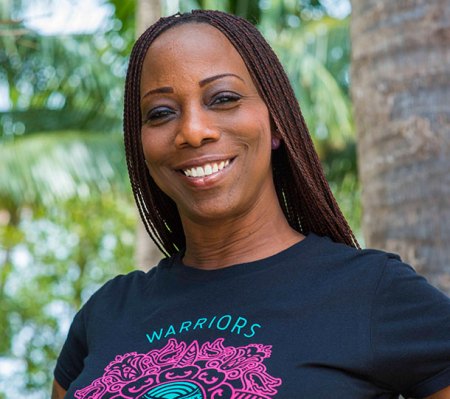 We are sorry to share that Adrian B. McClenney has died. Adrian was 46 years old–a beautiful, wife, mother, grandmother, sister and friend.

I met Adrian in New York when we both participated in a workshop conducted on behalf of the Metastatic Breast Cancer Alliance. We were there to provide insights on what people living with Stage IV breast cancer wanted the general public to know about the disease.

I called Adrian and asked if she would like to go to breakfast. She readily agreed and met me in the lobby. Adrian had a seemingly effortless beauty–I don’t know many people who could look that radiant, that together, first thing in the morning, but Adrian definitely could!

We started talking and I learned Adrian was a bus driver until she was diagnosed with metastatic breast cancer. If there was an award for Nicest and Most Glamorous Person Driving a Bus she surely earned it. The transit industry’s loss was patient advocacy’s gain: Adrian was active with many groups–both where she lived in Miami, but also on a national level.

Just a few weeks ago, Adrian flew to California to participate in Project Lead, a prestigious science training program for breast cancer activists. She also is a 2016 Ford Model of Courage–she participated in a photo shoot, modeling gear that is sold online to raise funds for three breast cancer non-profits.

Adrian held a special place in my heart because like my mom, she had inflammatory breast cancer (IBC). IBC is a rare, but aggressive breast cancer that doesn’t have a lump. Overnight, a person’s breast may become red and swollen with the skin having the texture of an orange peel. It accounts for about 5% of all breast cancers and is usually found at Stage 3 or Stage 4. People with IBC are often misdiagnosed–their cancer may be confused for a breast infection such as mastitis. Further complicating Adrian’s case was her breast cancer’s triple negative subtype. Triple negative breast cancers are often more aggressive, and, since there is no protein or receptor to target, chemotherapy is typically the only treatment available.

It took five months for Adrian to be properly diagnosed. She worked to inform others about IBC, starting an initiative called Hot Pink  High Steel Toe Boots “to educate the world about inflammatory breast cancer.”

Adrian was diagnosed with Stage 3b IBC on May 19th 2011. Her treatment regimen consisted of 16 cycles of chemotherapy, a bilateral double mastectomy and 37 radiation therapy treatments. In  March of 2012, Adrian had No Evidence of Disease (NED). Unfortunately, in July 2014 she learned her cancer had returned and this time it was metastatic, having spread to her neck, check wall and pelvis.

When me met in New York, Adrian told me a little about her family and her pride and love were obvious. “All I could think of were my children and who would take care of them,” she said, when remembering her diagnosis. Her daughter was in fourth grade at the time of her original diagnosis. Her son was playing college football for a well-known program but Adrian would never have told me that–she seemed very modest–both about her own talents and those of her family. 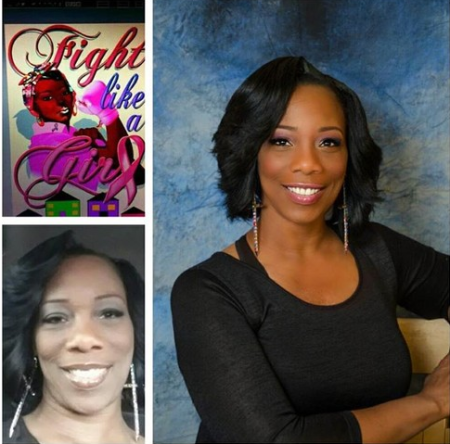 On Facebook, she was Author Adrian–she wrote two books: “Pink Lifesaver”, a 31 day affirmation book with biblical scriptures included and “Pink Sunshine”, a self-help workbook designed for you to realize what you’re grateful for and what truly means the most to you. She  also co-authored “Igniting Your Faith Factor.”

A quick glance at Adrian’s Facebook page shows the tremendous legacy she leaves. Friends and fellow advocates from across the county shared photos and how much Adrian touched their lives. Many spoke of her laugh, her smile and her strong faith. Others also shared how Adrian had reached out to encourage and inspire them when they faced challenges of their own.

Her faith never wavered. Adrian was often exhausted from her treatments but few people who saw her would have guessed this. “There are many things in life that happen that we don’t plan, but we adjust, regroup and keep pushing forward,” she said. “No matter what, I refuse to lose. I am tired every day, but it is my duty to fight like a big girl. All the challenges I face, I do it with a smile. I have a family that needs me, but loves me more.”

Our sincere condolences to Adrian’s family and friends. She will be sorely missed.

This entry was posted on Sunday, August 14th, 2016 at 5:22 pm and is filed under Advocacy, Uncategorized. You can follow any responses to this entry through the RSS 2.0 feed. You can leave a response, or trackback from your own site.