It it is never easy to share the news of another life lost to metastatic breast cancer. But it is particularly hard to let you know that our dear friend and MBCN board member Ginny Knackmuhs has died. Our sincere condolences to Ginny’s family, friends and fellow advocates.

Ginny’s accomplishments on behalf of MBCN and her fellow patients are far-ranging and enduring. She was the anchor of our website–a trusted resource for people around the world. Ginny was MBCN’s treasurer and webmaster but her reach far exceeded those official duties.

Ginny’s husband, Gary, used to refer to  us  as “your people.” If someone from MBCN or another advocacy group called the Knackmuhs’ home and he answered he would hand the phone to Ginny and say, “It’s your people.” He said all of these groups collectively reminded him of “The Five Families” as depicted in “The Godfather.” Although this wasn’t an entirely accurate assessment, in some ways Ginny was our Tom Hagen, the capo who got things done. She was a great natural leader and a woman of decisive action.

As Texans say, some people are all hat and no cattle. Not Ginny– because her treatment center didn’t have an in-person support group, Ginny helped establish one. When a national breast cancer organization overlooked people living with Stage IV breast cancer, Ginny presented the facts and asked them to re-evaluate their stance. (They did.) When the Metastatic Breast Cancer Alliance was coming together, Ginny was front and center and helped jump-start its creation.

A few years ago, an academic cancer center asked us to co-host a webinar on key issues in metastatic breast cancer. The proposed webinar was to take place in November–both Ginny and I felt that attendance would suffer because in the wake of Breast Cancer Awareness month, many people want to take a break from cancer talk. We asked our contact at the cancer center to shift the event to September or October but she said  their schedule was inflexible. Ginny was not to be denied. She politely–but firmly–said we could do it in October. And we did! I would have caved  and resigned myself to the November slot, but Ginny was made of stronger stuff.

“Ginny was the heart and soul of MBCN’s online presence,” says Shirley Mertz, MBCN’s President.  “Many visitors to MBCN.org  have expressed their gratitude to find patient-centric information.” “This is the most informative site I have been to yet,” wrote Jean M.  “Thank you for giving me a place to go, a place to get information that pertains to me.  I was moved by the many testimonials/videos.  So positive.  I found the technical section on drugs and treatments very informative – thank you for that. Also found it easy to navigate your site. It’s a great website and lots of resources, which I will be using.”

Doctors also commented on the wealth of information on the website, according to Shirley.  “This is all to Ginny’s credit,” says Shirley.  Ginny worked extremely hard on MBCN’s redesigned website which will debut shortly. It is a wonderful legacy.

MBCN has popularized the phrase “Scan, Treat, Repeat: Stage IV Needs More.” Ginny and I were talking about a motto that could be used to along with MBCN’s new logo and that is what we came up with. Ginny created the first iteration–complete with the now familiar circle and three arrows. I have seen doctors use the Scan Treat Repeat logo in their metastatic breast cancer presentations and patients quickly embraced it, too. Anyone would be proud to contribute a phrase to general usage, but Ginny has the distinction of contributing  the saying as well as boosting people’s understanding of the disease. MBC advocates often talk about “changing the breast cancer conversation.” Ginny has well and truly has done that.

Board member Deb Tincher and Conference Chair recalls, “If you attended an MBCN conference in recent years, you probably knew Ginny. As treasurer, she sent out scholarship reimbursement checks. It was an arduous and time-consuming task that required collecting surveys, expense forms and receipts from the attendees. Ginny knew many attendees are on tight budgets–she cut the reimbursement checks as quickly as possible. She was always thinking of others.”

Ginny, by her own example, pushed many of us to expect more and to do more. A couple of years ago, there was a special event in Time Square to call attention to October 13th, National Metastatic Breast Cancer Awareness Day. Ginny and I joined some other Stage IV patients and advocates on GMA’s outdoor plaza. (Ginny, true to her 1960s roots, took the precaution of taking only her ID and a small amount of cash with her. “In case we get arrested,” she explained as we walked over from our nearby hotel.)

Ginny with SHARE’s Christine Benjamin and me on Time Square

I thought that if we were lucky, we might get our signs on television. Ginny actually got the weather person to acknowledge the MBC delegation as well as the Awareness Day designation on national television. “Next year I want to go INSIDE the studio and be interviewed,” Ginny told me.

Ginny had lobular metastatic breast cancer (most breast cancer is ductal) and  she also had the triple negative subtype which notoriously aggressive. She did not write extensively about the specifics of her case, but MBCN would like to share some information we think she would want everyone to know.

“I was diagnosed in 1992 with early stage cancer–Stage 0 or DCIS–the earliest you can have,” Ginny wrote in this blog post. ” I had a simple mastectomy, which was considered a 100% cure, and breast reconstruction. I continued on with my life, without worrying too much about breast cancer. . . I continued for 17 years with annual mammograms, 17 years of breast self exams, 17 years of annual checkups and then I was diagnosed with advanced breast cancer with metastases to the bone–stage IV–treatable but no longer curable. I was no longer the poster girl for early detection, because this time early detection had failed me. Like many in our pink-drenched communities, I had accepted the message that early detection was the cure and that mammograms were a fail-proof screening test.”

Ginny went on to say that her breast cancer education began the day she received her Stage IV diagnosis. “I learned that mammograms are a good tool, but less effective when the woman is young and premenopausal; less effective for women with denser breast tissue; less effective at identifying aggressive cancers; susceptible to many false positives (identifying suspicious areas which turn out to be cysts or other normal anomalies); and unable to predict whether the cancers that are identified will go on to be deadly or will proceed in an indolent and unthreatening growth cycle, better left alone. The message promoted by many breast cancer organizations is one of positivity, survivorship and fighting and winning. So the actual capabilities of a screening tool have been exaggerated and early detection has become synonymous with the cure.'”

Ginny wanted her experience to have meaning. “I never want to characterize cancer as a gift,” she wrote. “I don’t think I need to endure treatments and side effects the rest of my life just to be a better person. But I’d like to believe that I have Stage IV metastatic breast cancer for a reason: to speak out about it, to educate people, to fill in the missing gaps in the breast cancer awareness messages, to dispel the ‘guilt’ myth, that this cancer is my own fault, that I failed to eat right, think positively, live well.”

She further noted that October 13 is Metastatic Breast Cancer Awareness Day. “It’s the one day in Pinktober that Metastatic Breast Cancer Network lobbied Congress for in 2009. One day to talk about the ugliness and deadliness of breast cancer, but also the promise and hope of 155,000 or more living with the disease in the US, struggling to live every day well, waiting for the next treatment to extend our lives a few months longer, hoping for a cure to finally stop metastases from occurring. . .It’s not too early to start thinking about October. I’ll be writing letters, lobbying the media, working to get the message out…” 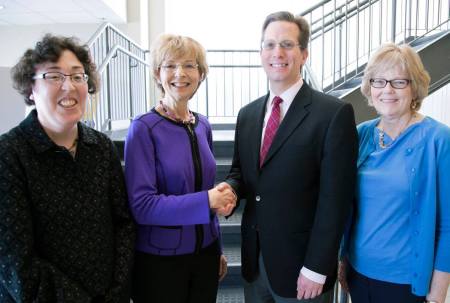 This entry was posted on Tuesday, August 16th, 2016 at 9:57 pm and is filed under Advocacy, MBC Awareness Day, Metastatic Breast Cancer Patient Voices. You can follow any responses to this entry through the RSS 2.0 feed. You can leave a response, or trackback from your own site.

One Response to Ginny Knackmuhs: An Uncompromising Advocate